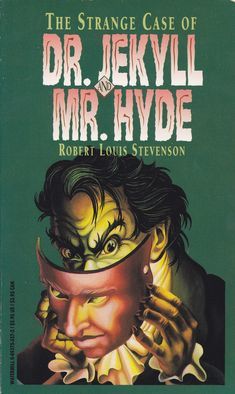 "If each, I told myself, could be housed in separate identities, life would be relieved of all that was unbearable..."
— Henry Jekyll
Advertisement:

Source of the Jekyll & Hyde trope, this 1886 book by Robert Louis Stevenson begins with a mystery. When a girl is brutally assaulted late one night, her attacker, calling himself Mr. Edward Hyde, pays off the witnesses with a cheque signed by the eminently respectable Dr. Henry Jekyll.

Jekyll's friend and attorney, Gabriel John Utterson, is disturbed when he learns this — because Jekyll has just recently made Hyde the heir to his £250,000 estate. Utterson starts to wonder if his client is being blackmailed, though Jekyll himself says there is nothing to worry about.

While Utterson continues to investigate his suspicions, Hyde is witnessed committing the savage murder of Sir Danvers Carew, a prominent Member of Parliament. Jekyll is clearly upset at this development, though he again reassures Utterson that everything is fine and reveals that Hyde has left him a note apologizing for everything and promising he shall not return.

Two months pass, during which time Jekyll seems to be at peace again, until his butler Poole contacts Utterson to report that a stranger has locked himself in the doctor's lab. When they break into the room they find Hyde, having committed suicide by poison, and two letters explaining everything...

The book can be read online for free here

There have been several adaptations and parodies of this book. What makes them particularly interesting is not that each one changes, deletes, or adds certain elements; but that they tend to make the same changes. In addition to, or instead of, the above story, here's what you'll usually find in film and stage versions:

open/close all folders
Adaptations of note

The 1920 movie provides examples of:

The 1941 movie provides examples of:

The 1968 TV Version The Strange Case of Dr. Jekyll and Mr. Hyde provides examples of:

Will Hyde die upon the scaffold? or will he find courage to release himself at the last moment? God knows; I am careless; this is my true hour of death, and what is to follow concerns another than myself. Here then, as I lay down the pen and proceed to seal up my confession, I bring the life of that unhappy Henry Jekyll to an end.