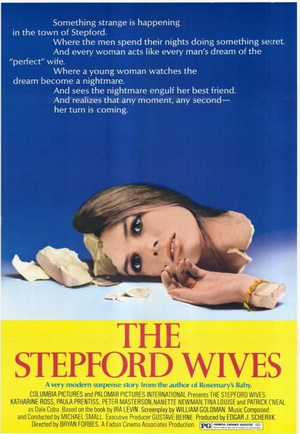 The Stepford Wives started life as a 1972 novel by Ira Levin. In it, Joanna Eberhart, her husband Walter, and their two young children move from New York City to the eponymous Connecticut commuter-town. Joanna becomes friends with fellow new arrival Bobbie Markowe, as the two of them also become more and more concerned with the behavior of the other housewives in Stepford, all of whom are impossibly beautiful, housework-obsessed, and totally submissive towards their husbands, who in turn are all members of the secretive "Men's Association."

The novel was successful enough to be adapted into a movie in 1975, directed by Bryan Forbes and starring Katharine Ross as Joanna and Paula Prentiss as Bobbie; William Goldman's script was fairly faithful to the original, with the major difference being a far more explicit finale showing what was happening to the wives. In both versions, the wives were robot duplicates that replaced the original women after their husbands had them murdered. Both versions of the story had Downer Endings.

While just a modest hit in theaters, the film quickly sprouted a meme in the 1970s, with the term "Stepford Wife" becoming a catchphrase used to describe female homemakers who were content to be "sexually repressed and concerned with domestic life, as opposed to being free and liberated women."

No theatrical sequels were made, but the movie spawned, over the course of two decades, three made-for-TV "sequels": The Revenge of the Stepford Wives, The Stepford Children, and The Stepford Husbands. The lack of Levin and/or Goldman's involvement was painfully obvious, and all three films were also victims of bowdlerization: in Revenge and Husbands, the victims were not killed and replaced but instead merely brainwashed, while Children had the replaced teenagers left alive for no readily-apparent reason, allowing in all three cases for a rescue and happy ending. The movie was also Recycled IN HIGH SCHOOL! as Disturbing Behavior. The film, the poster in particular, also inspired The World's End.

In 2004, Frank Oz directed a more overtly comedic remake of the original film. The production suffered from severe behind-the-scenes turmoil, including actors walking off the project and some last-minute reshoots. Many viewers found the revelations of the resulting finale to come completely out of left field and contradict the rest of the movie.

The original film/novel, and its sequels, provide examples of:

Bobbie: "Maybe it's some kind of hormone thing; that would explain the fantastic boobs. You've got to have noticed."
Joanna: "I sure have. I feel pre-adolescent every time I set foot in the market."

The 2004 version provides examples of: