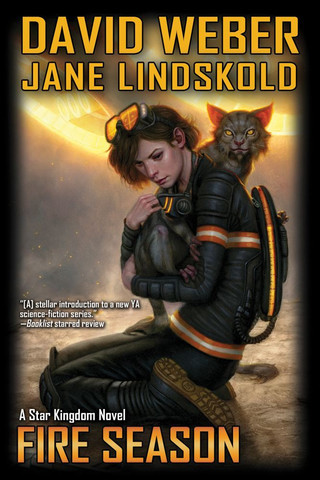 A Prequel Spin-Off of the Honor Harrington series centering on one of Honor's ancestors, this is a series of Young Adult novels taking place several centuries earlier, during the original series' Back Story.
Advertisement:

Stephanie Harrington is a young girl whose family has recently arrived on the frontier world of Sphinx. Having been uprooted from her homeworld and her social life there, she is not pleased to be living on a homestead in the middle of the woods on a boring backwater planet. All that will change when she meets Climbs Quickly, a treecat scout, and life on Sphinx becomes much more exciting...

This series is notable among the Honorverse books for radically limiting the scope of the series' universe, restricting the action to the planets of Sphinx and Manticore, and for being entirely divorced from the high-wire military and political Space Opera of the mainline novels. As such, it's often recommended as a starting point for younger readers, and for those who want a more gentle introduction to the Honorverse.