The Lithuanian-Muscovite War has begun. Or, at least, it was about to. While the forces of the Grand Duchy were preparing in secret, Tver and Moscow went into an all-out war, both hoping to take down the other. But, by then, it was already too late.

The Silver Knight is an AlternateHistory.com timeline written by Augenis. 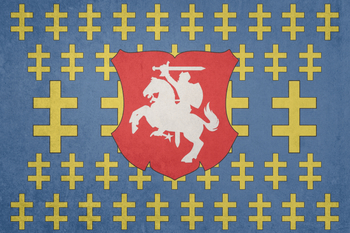 In the period between 1366–1368 the wooden Kremlin of Moscow was replaced by a stone one. This new fortification blocked the further expansion of Grand Duchy of Lithuania eastwards as the pagan nation was unable to conquer the city and thus the Duchy.

However in this timeline this fortification is not built, as Tatars of the Golden Horde seize the funds for the construction to be able to fight their own internal conflicts. Because of this Lithuania is able to defeat Moscow.

The story follows the Lithuanian nation and the rest of the world through the ages, it's rises and it's falls. This timeline is truly massive, beginning in 1367 and going through hundreds of years, until finally stopping after two years, having stopped in the year 2005. Notable events include:

The timeline can be read here