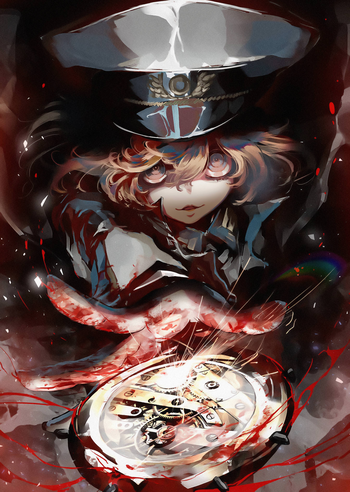 We are not worthy of God's great miracles.
I praise His Holy name, and...
I submit to Your Glory.
Tanya von Degurechaff: But we are soldiers, and if orders say we must burn beautiful Arene to the ground, that is what we must do.
Commander Mortiz Paul von Han: Who would want to be a soldier, huh?
Advertisement:

No, the truth is much stranger and far more terrifying. For she was...an adult male HR manager in modern Japan.

The Saga of Tanya the Evil (Youjo Senki, "War Chronicles of A Little Girl") is a Light Novel series created by an author under the pseudonym Carlo Zen in 2013, based on the web novel from 2010. In 2016 it received a manga adaptation by Toujou Chika, whose previous work consist of the Code Geass: Oz the Reflection spin-off series. It has also received an Animated Adaptation under the title Youjo Senki: Saga of Tanya the Evil, premiering on January 6th, 2017. It is the first show produced by studio NUT, which is mostly compromised of talents from Gainax and Madhouse. It is available for worldwide streaming on Crunchyroll. Funimation's Simuldub began on Jan 23, 2017, and a new dubbed episode is released every Monday, here

A second season was announced in June 2021

, taking place chronologically after the events of the 2019 film.

On November 16, 2021 an audiobook of Volume 1 Deus lo Vult was released under the Yen Audio, a partnership between Yen Press and Hatchette Audio, label narrated by Monica Rial herself, even doing her Tanya voice when reading the titluar character's dialogue. Other works include Overlord (2012) and Sword Art Online also narrated by their respective main character's English VAs.

It is interesting to note that there's quite a big Tone Shift from the light novel, the manga, and then the anime (as evident by the Art Evolution of the character designs.) Hence, the whole universe gets progressively Darker and Edgier and all the character interpretations reflect this.

The main characters are part of the crossover Isekai Quartet, alongside the casts of KonoSuba, Re:Zero, Overlord (2012), and as of the second season, The Rising of the Shield Hero.