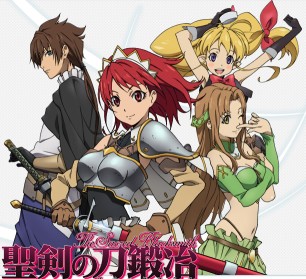 The Sacred Blacksmith (Seiken no Blacksmith) is a series of Light Novels written by Isau Miura and illustrated by Luna, which was published from 2007 to 2013 for a total of 16 volumes. A manga adaptation was serialized in Monthly Comic Alive from 2009 to 2017, and a 12-episode anime adaptation by Manglobe aired from October to December of 2009.

Cecily Cambell, a Knight Guard of the Independent Trade Cities of Housman, is new to her job of keeping the peace in the Heroic Fantasy world she inhabits. She soon meets Luke Ainsworth, an exceptionally skilled blacksmith who is the only one that can make katanas, along with his overly-cute Elfish apprentice Lisa. Circumstances soon conspire to reveal Luke has a very unusual and magical way of forging swords; a talent desired by the nearby empire, and that's not all. Demons appear in the Trade Cities along with swords that harness the powers of nature. All three are rooted in the recent Valbanill War, which might not be quite over yet....

Have we mentioned that Katanas Are Just Better?