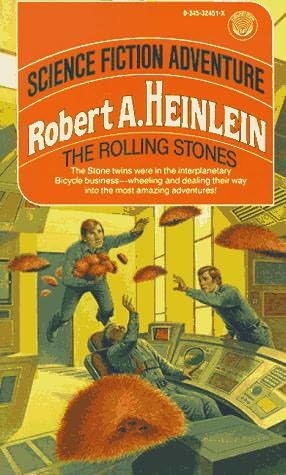 A well-loved YA novel written by Robert A. Heinlein and published in 1952, The Rolling Stones follows the adventures of the Stone family, primarily through the viewpoint of fifteen-year-old red-headed troublemakers Castor and Pollux. Together they finagle their father, beleaguered script writer Roger Stone, into purchasing a spaceship for a family outing through the solar system. Hilarity Ensues.
Advertisement:

Like most Heinlein novels, it's very much hard science fiction: all of the math checks out.

It takes place in the same universe as The Moon Is a Harsh Mistress, which is a direct prequel. Hazel Stone returns in The Cat Who Walks Through Walls.

Has nothing to do with other types of rolling stones.