Literature / The River Between 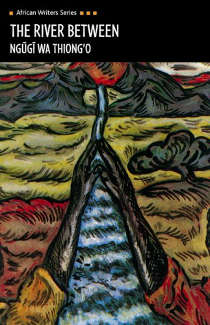 The River Between is a novel written by Ngugi wa Thiong'o focusing on the impact of European settlement on Kenya from before up to the earliest parts the Mau Mau Uprising. The story focuses on three sides: the Christian missionaries and African Christians, the latter led by the passionate Joshua, a Kenyan Christian convert; the Kiama, a council determined to drive the white man out of Kenya, led by former convert Kabonyi; and Waiyaki, the son of the Gikuyu tribe's spiritual leader Chege, who is determined to educate the people of the tribe—and in the future, all of Kenya—in order to bring unity to his fellow Africans—and who may also be the prophesied 'black messiah' who will save the Africans, all of which dwell on the ridges of Kameno and Makuyu.

Tensions between the Gikuyu tribesmen and the missionaries/converts rise when the Joshua's youngest daughter, Muthoni, decides to run away from home in order to be circumcised and accepted into the tribe, in an attempt to meld her Christian upbringing with tribal life. When she dies (possibly from infection), each side is more than willing to blame the other: Joshua, the missionaries, and converts feel that this is a sign that all things African are barbaric and must be eradicated, especially female circumcision, while Chege and the other tribesmen believe that Muthoni's death was caused by the Gikuyu god, Murugu, as punishment towards Joshua for converting to Christianity and also serving as a sign that no good will come from the Europeans or their religion.

Caught in the middle of this conflict is Waiyaki, who carries the burden of possibly being the 'black messiah' and who struggles over whether or not there is any way to unify his tribe's traditions with the ways of white man, and thus unify all Africans, converted and traditional. His growing popularity and reputation as 'The Teacher', a title he earns by setting up schools throughout the village, as well as the ire of Kabonyi and his son, Kamau, due to this popularity, does not help the situation, especially since both are powerful members within the Kiama and use this power to attack Waiyaki. All of this occurs as Waiyaki slowly falls for Nyambura, Joshua's eldest daughter...