Literature / The Rise of the Saxons 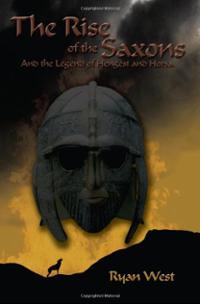 Sutton who?
"Forget the Spartans and the Romans, forget Genghis Khan and 300, THIS IS ENGLAND!"
—Reviewer A.P. Tantum

.
"Derfel will tell the truth of how we came to this land and butchered his vermin and held down the holy women face first in the flames. And tell of how we drowned and burned the worthless children of the Celts as we made way for our own people to settle. You are about to read the beginnings of a proud nation that I like to call England."
—Hengest

Denmark, the fifth century AD. A Jutish village is destroyed by Scyldings; the only survivors of the massacre are the prince Aesc and a baby, which Aesc adopts as a brother and names Horsa. Some passing Jutes who survived another massacre take the two children to safety in the land of the Angles.

Living amongst the Angles, Aesc adopts the name Hengest, a nickname from his early childhood. When the king of the Angles is killed in battle, Hengest takes to the throne.

Eventually, King Vortigern of Britain hires the Jutes, Angles and Saxons to defend his kingdom from the Irish and Picts. While in Britain, Hengest and his men hatch a plan: to invite increasing numbers of Anglo-Saxons onto the island and eventually take it for themselves, ethnically cleansing the Celts in the process. As the land of the Angles collapses into civil war, Hengest and Horsa create a new homeland for their adopted tribe in Britain: England.

Since the publication of this novel, West has gone on to write similar books under the name of S.A. Swaffington. Oddly, his website

claims that his 2011 novel Offa: Rise of the Englisc Warrior was his first treatment of Anglo-Saxon history. As Rise of the Saxons was not particularly well-reviewed

on Amazon, it is possible that the author views it as an Old Shame.