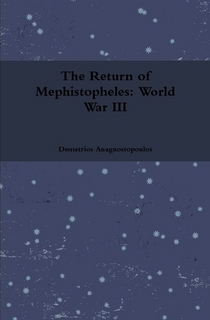 The Return of Mephistopheles: World War III is the second volume in the series The Spectral Chronicles.

From the back cover: It is the year 2093. As of late, the ghost Demetrios has been troubled by strange dreams. Shortly thereafter, the cult leader William, also known as the demon Mephistopheles, returns, and with him he brings the nightmare that was hoped would never happen: World War III. With the help of his friends and new allies, Demetrios sets out to keep their home planet from being conquered and brought into Satan's unholy empire.