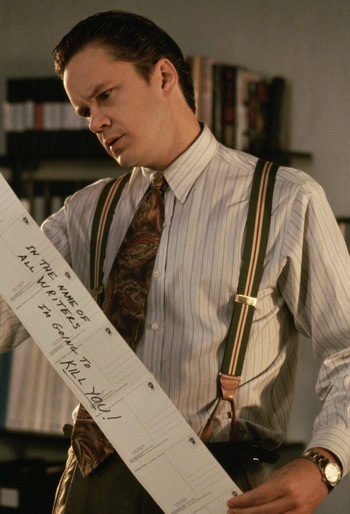 A 1988 satirical novel by Michael Tolkin, The Player was brought to the screen in 1992 by director Robert Altman with a screenplay also by Tolkin. The film version starred Tim Robbins, Vincent D'Onofrio, Greta Scacchi, Peter Gallagher, and a ton of stars as themselves.

Griffin Mill is a sleazy studio executive whose job it is to decide which screenplays get produced. At the outset, he finds himself both the target of a power play by another executive gunning for his job, and receiving death threats by a stalker, supposedly a screenwriter whose pitch he once rejected. In a confrontation with a disgruntled screenwriter he believes to be the stalker, things escalate into a fight and Griffin accidentally kills the other man. Griffin now must stay a step ahead of the police, who are investigating the writer's death, as well as his professional rival, even as he finds himself drawing ever closer to the girlfriend of the man he killed.

Incredibly self-referential, The Player attacks the film industry and the Development Hell each film has to go through to get made. It also drops you into the social atmosphere of Hollywood and is ultimately an inverted murder mystery, with a man worried about his evil act being discovered.

Tropes, now more than ever!: