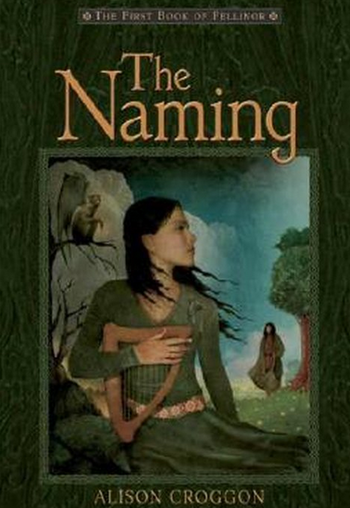 This page is intended for tropes that are exclusive to The First Book of Pellinor. Tropes from the other three books can be found on the series page.Also known as The Gift in Australia, this is the first Book of Pellinor. Maerad is a slave in a random, secluded village when she coincidentally meets Cadvan, an older, wise mentor figure. She soon learns that she's a Bard, one of the special people who have the Speech. The Speech lets Bards do magic things, although always inside a nice, harmonious balance with everyone. Also, the Speech comes to Bards randomly, although once it comes to them, they know the entire vocabulary. Just like that.

Maerad spends time in a Bard School, which is the home of normal Bards, i.e., ones that weren't enslaved in random villages. She is so shocked by the variety of food that throughout the rest of the story, she commonly spends whole paragraphs listing every type of food at banquets and feasts.

Later, it is revealed that Maerad is The One, The Fated One and The Foretold, which is why the evil guy, Sharma, or The Nameless One, is hunting her. She and Cadvan start running all over the world, escaping from the bad guys and from the formerly good guys who allied with the head Bard, who was a sexist and thought that The One could only be a guy. Meanwhile, Maerad is being angsty the whole time, although about different things.

The Naming is continued in The Riddle, The Crow and The Singing.