Literature / The Most Dangerous Game 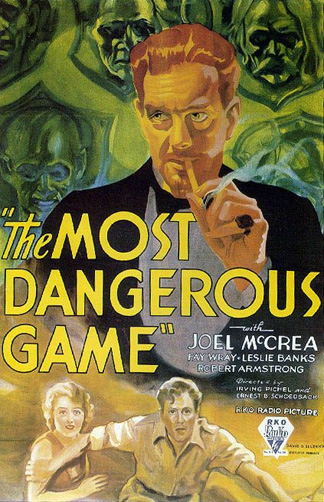 "I wanted the ideal animal to hunt," explained the general. "So I said, 'What are the attributes of an ideal quarry?' And the answer was, of course, 'It must have courage, cunning, and, above all, it must be able to reason.'"
"But no animal can reason," objected Rainsford.
"My dear fellow," said the general, "there is one that can."
Advertisement:

"The Most Dangerous Game" (also known as "The Hounds of Zaroff") is a short story by Richard Connell, first published in Collier's magazine in January 1924.

Sanger Rainsford, a hunter of big game from New York, finds himself shipwrecked on an island. He finds a big mansion occupied by Zaroff, a bored old Russian general, who describes his one true passion: hunting. The general tells Rainsford that he has grown bored of hunting animals, and only enjoys Hunting the Most Dangerous Game of all... humans. (The title has a double meaning, referring both to a "game" or contest between the general and his quarry, as well as "game" in the sense of an animal that is hunted.) And Rainsford has just become his next prey.

The story has been directly adapted for film at least eight times, though only twice under its original title: in 1932, with Joel McCrea as Rainsford and Leslie Banks as Zaroff, and in 2008, with Brian Spangler-Campbell and Mark Motyl, respectively. However, it has been imitated by a vastly greater number of works, and is the source and Trope Namer of the Hunting the Most Dangerous Game plot.

The full original story can be found here.

The Most Dangerous Tropes:

Tropes particular to the 1932 film: