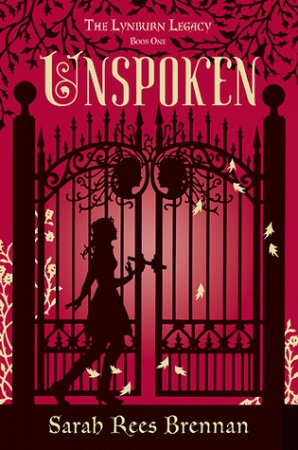 Sarah Rees Brennan's follow-up to The Demon's Lexicon, another young adult Urban Fantasy trilogy involving sorcerers in modern-day England, but with a quite different approach. The three books are Unspoken, Untold, and Unmade.

The tiny burg of Sorry-in-the-Vale spent centuries under the thumb of the mysterious Lynburn family, until a generation ago when they left for America. But now they've returned, and no one is sure quite what that means. But one girl is determined to uncover the truth: budding Intrepid Reporter Kami Glass, who gave her school a newspaper just so she could write for it, and sees this as simply the opportunity for the scoop of a lifetime. But soon she finds a much more personal reason to get invested: she's spent her whole life hearing a voice in her head, claiming to be a boy named Jared. And one of the younger Lynburns just happens to have that name...