Literature / The Lord of the Rings
aka: The Fellowship Of The Ring 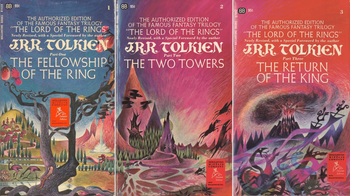 The Lord of the Rings by J. R. R. Tolkien is too grand and complex to be summarised in full. Succinctly, it is by far the most recent addition to the canon of Western epic literature and is the epic which set the stage for the entire High Fantasy genre that followed in its wake. Interestingly, the story was originally intended as a shorter sequel to The Hobbit, but as its author famously remarked, "the tale grew in the telling." The Silmarillion, posthumously published in 1977, serves as a prequel to this, though its material was first written of all.

In addition, the books have been adapted multiple times for radio (with a 1981 BBC version as the most highly regarded) and theatre (most recently as the abovementioned 2006 musical, retooled for the West End from 2007-2008). The books and adaptations themselves have inspired various video games, tabletop games and card games.

The Harvard Lampoon published a parody titled Bored of the Rings in 1969, which manages to cover the entire journey in under 200 pages. In 1985, Fergus McNeill and Judith Child released an Amstrad CPC Text Adventure game of the same name, which also parodied Lord of the Rings, but was not based on the novel; one year later, they also released a prequel called Boggit. In 1996, Derek Mason made an online interactive fiction game called Quest for the Golden etc...

that was also a parody of Lord of the Rings, and of 1980s text adventures in general.

For many ages, the scourge of the orc has plagued Middle-Earth, but from the bowels of Isengard, a new breed, refined and improved by Saruman, threatens the land. Unburdened by pain and hatred of the sun, they are brutish and cruel creatures bred for war

Example of:
Our Orcs Are Different

For many ages, the scourge of the orc has plagued Middle-Earth, but from the bowels of Isengard, a new breed, refined and improved by Saruman, threatens the land. Unburdened by pain and hatred of the sun, they are brutish and cruel creatures bred for war