Literature / The Legend of the 10 Elemental Masters 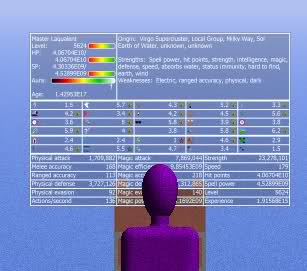 Knuckles has a mind for numbers.
"Man, you seem to have a spell for everything!"
— Ivan

The Legend of the 10 Elemental Masters is more than a book. Created by Nick Smith (a.k.a. Ulillillia), it is a glimpse into his mind. Part literature, part video game, the very narrative of the story is exotic. A little heavy on the numbers, perhaps, but nonetheless a fascinating read from the man who brought us Platform Masters and the five secrets of Bubsy 3D

An evil force plans on subjugating the inhabitants of Earth using the raw power of the 10 Elemental Masters holding the planet together. Sensing impending doom, Knuckles, a small, purple extraterrestrial, heads to Earth to find the cause and save the day. Along the way, three teenagers, Ivan, Tu, and Tyler, join Knuckles in his quest. Despite having so little time to stop the unknown agent, they regularly take breaks and find fun things to do along the way. As they uncover the mystery, it seems like the mysterious force is always a step ahead of them...

Stuck in Development Hell since 1999, the basic format of a movie script was adopted in 2006, and the book stuck with that format when it was published in 2009.