Literature / The Land of Laughs 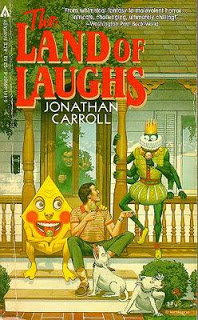 Yes, I like masks and things that are different and fantastic, but enjoying the almost-real and fearing the monstrous are very different things.

The Land of Laughs is a bizarre fantasy novel by Jonathan Carroll, as far from Standard Fantasy Setting as possible (no dragons, but a lot of white bull terriers). Has subtle (but powerful) elements of Horror, but also Magic Realism. If not for its numerous - and not playful - genre elements, its metafictionality could tempt someone to pidgeon-hole it as an example of Postmodernism. Contains tones of suspense, but everyone knows who killed Laura Palmer: the question is why he did it and what to do with the consequences.

Thomas Abbey, the main character, is tired with teaching American literature to resistant kids and with everyone seeing him basically as a son of his father, who used to be famous actor before he died. One day he decides to write a biography of his favorite writer, Marshall France, leaves his collection of masks at home and goes to France's home town, accompanied by his new girlfriend, puppet collector and fellow France reader, Saxony. When in Galen, they have to convince France's daughter Anna that Thomas should be allowed to write the book. Their Galen landlady is quirky Mrs. Fletcher, a self-confessed ex-inhabitant of an asylum and the owner of a white bull terrier with fluctuant temper that follows them around. Something seems to be wrong with her, and something becomes to seem wrong with everything in Galen, though it is not easy to say what exactly: for example, there is a woman who, from time to time, bears an uncanny resemblance to a kite.

Clearly, a must-read for all New Weird fans (although it was written long before the invention of the term), po mo connoisseurs, and bull terrier lovers - as well as for postmodernist bull terriers devouring New Weird. (Nothing strange in that, when you came to think about it. When you are a bull terrier, once you stop reading fiction there is no way for you not to be postmodern.)