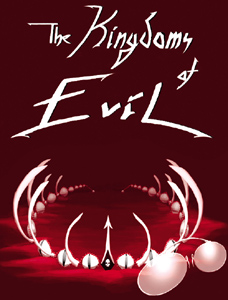 "Modest worm!" Sneered DeMacabre, "can your puny intellect encompass the concept of 'public works project'? For that, you parasite, is what the Lord of Misery demands to know."
The Kingdoms of Evil

is an online serialized novel about Freetrick Fiend, a college student who finds out he's the new ruler of the Kingdoms of Evil.
Advertisement:

As the new focus of all evil in the world, Freetrick must survive court intrigues, well-justified foreign invasion, internal rebellions, and a looming environmental catastrophe that might just kill everyone anyway. Because in a land of constant shadow, what do the monsters eat?