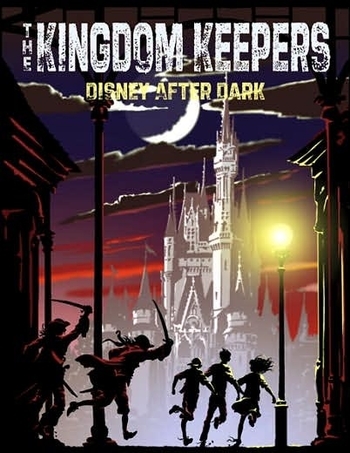 A series of novels written by Ridley Pearson, otherwise known for writing horror and suspense novels as well as another Disney series Peter and the Starcatchers, that take place in and around Walt Disney World.

Finn Whitman is an Ordinary High-School Student who lives in Orlando near Walt Disney World. He and four other teenagers from the area - Willa, a shy girl with a love for animals, Maybeck, a snarky distrusting boy, Charlene, an athletic girl, and Philby, a homework loving boy - are selected to be turned into DHIs, holographic hosts for the Magic Kingdom that would give prerecorded speeches to guests. However, soon after they find themselves being transported into the park at night when they fall asleep. There they learn from an elderly Imagineer named Wayne that they were chosen specifically to stop the plot of the Overtakers, a group of villains apparently led by Maleficent. The Overtakers scheme to take over the park and beyond, and since they start out Invisible to Normals, the Imagineers needed someone to stop them. Along the way, they have to deal with two mysterious girls: Amanda, a schoolmate of Finn's who has an interest in him, and Jez, a goth-like girl. Both of them appear to be hiding something.

The original series consists of seven books and one novella; another novella was released in 2015, leading into a Sequel Series trilogy, The Return:

A new series, Kingdom Kids (featuring the children of the now grown Kingdom Keepers), has been announced. There were also plans for a proposed TV series headed by Kevin Smith but they were scrapped when it became clear there were too many IPs to handle.