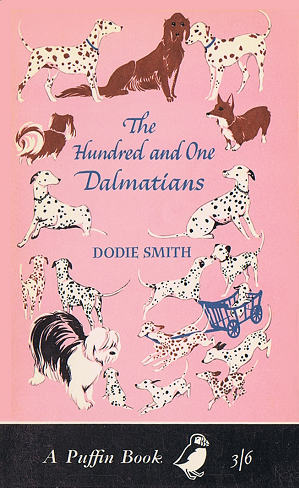 Pongo and Missis are a pair of married Dalmatians who have just become the parents of a litter of fifteen. They belong to a newlywed couple, Mr. and Mrs. Dearly, who live in a tiny place near Regent's Park. Their domestic happiness comes under siege, however, when Cruella de Vil, a Rich Bitch and distant acquaintance of Mrs. Dearly (with an inordinate love of fur), attempts to buy the puppies. When she's told that they're not for sale, she hires thieves to kidnap them. When Scotland Yard is unable to find them, Pongo and Missis set out to rescue their puppies themselves, following a tip gained through the secret, nationwide "Twilight Barking" network of dogs.

The anxious parents find that Cruella has imprisoned their puppies in her country estate (along with 82 she had previously acquired), with the intent to skin them and make spotted Dalmatian-skin coats. Pongo and Missis rescue them all and return home triumphant with 97 puppies in tow. A rescued nurse-dog named Perdita and her long-lost beau round out their numbers to 101, and the Dearlys end up buying the same country estate where the pups were originally held prisoner.

The book was adapted several times by Disney into 101 Dalmatians. Smith also penned a lesser known sequel, The Starlight Barking (1967). Taking a sci-fi Genre Shift, the story begins with the entire human population of Earth falling into a sleeping trance. As the dogs take control of society and gain superpowers, they learn that alien dogs from the dog star Sirius are responsible. Believing humanity will inevitably destroy the Earth and themselves in a nuclear war, they wish to take all the dogs away back to their home planet and erase dogs from all human memory. While many seriously consider the offer, ultimately the dogs of Earth decide they cannot abandon humans and will take their chances staying on Earth.

Alternative Title(s): One Hundred And One Dalmatians, The Starlight Barking