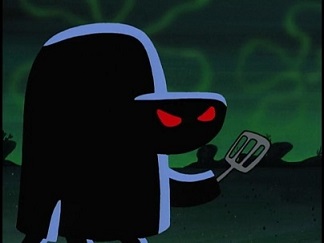 "The Hash Slinging Slasher" is a short story written by struggling artist, clarinet-expert and restaurant cashier Squidward Tentacles. Originally written as a way to scare his good friend SpongeBob SquarePants into behaving properly while working the night shift at his terrible job, the story has been praised for its frightening nature and haunting realism.

The story tells the tale of the life of an unnamed fry cook just like SpongeBob - only clumsier. One night while cutting patties, he cut off his own hand by mistake - only he wasn't a sponge, so it didn't grow back. Then, he got hit by a bus. Then at his funeral, he was fired. So now, every Tuesday night, his ghost appears to wreak horrible vengeance upon the Krusty Krab. There are three signs that foretell his arrival - first, the lights will flicker on and off. Second, the phone will ring, and there will be nobody there. Finally, he arrives in the bus that ran him over. Then, he crosses the street without looking both ways - because he's already dead - then he taps on the window with his grizzly spatula hand. He opens the door and slowly approaches the counter, and finally: HE GETS 'YA!

List of tropes that appear in The Hash Slinging Slasher: