Literature / The Guns of Navarone 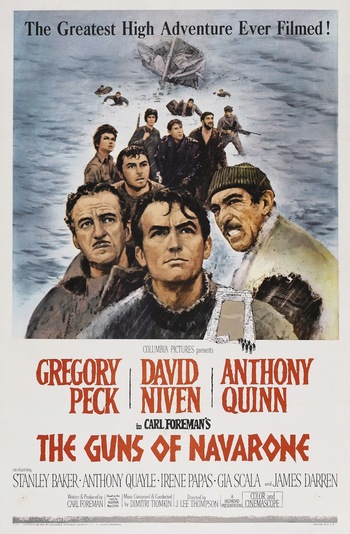 The Guns of Navarone is a novel by Alistair MacLean published in 1957, and more famously a classic 1961 film adaptation written by Carl Foreman and directed by J. Lee Thompson.

The events depicted take place during World War II but are entirely fictional. A contingent of British soldiers are stranded on an island in the Aegean Sea and rescue by ship is impossible due to the large battery of anti naval guns located at the cliffs of Navarone. Due to the embedded position of the guns in the cliffs, destroying them by air strikes proves impossible. A British major (Anthony Quayle) assembles a commando team and convinces a reluctant captain (Gregory Peck) to join. The movie chronicles the squad's attempt to sneak into Greece and blow the guns. Also stars David Niven and Anthony Quinn.

MacLean wrote a lesser-known sequel (to the movie adaptation, not the original novel), Force 10 from Navarone, published in 1968. A film version, starring Robert Shaw, Harrison Ford and Edward Fox, was released in 1978.

Also notable around these parts for being one of the films that Silas S. Warner and Hideo Kojima, the respective creators of Wolfenstein and Metal Gear, have cited as a source of inspiration for their games.

The Guns of Navarone provides examples of:

Alternative Title(s): The Guns Of Navarone