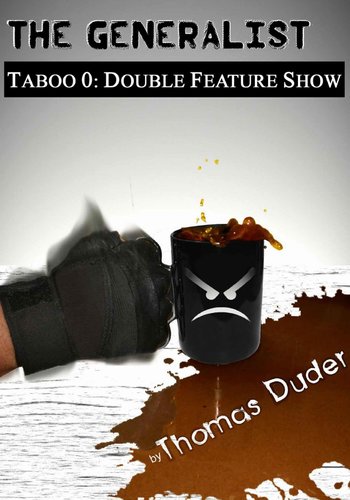 So. You're walking around in the Post Apocalyptic half-Crapsack World of Neo-Tokyo...uh, Neo-Los Angeles, and you've just been kidnapped by one of several secret organizations that are hellbent on collecting people like you in order to safeguard humanity against people like you.

The worst part about it? YOU are a person like you.

So you transform into a monster and fight them, go on a rampage, devouring and killing as many humans as you can, until The Shop shows up to put the literal smackdown on you.

With over the top combat sequences and an absurd sense of humor, The Generalist is a novella action-adventure, urban fantasy series created by Thomas Duder, Author of the Things.

The series revolves around the titular character, Frank "The Generalist" Todd and his wisecracking Un Grimm Troll-gened partner, Daniel "Dash" Hopkins, the two owners of a supernatural goods and services store known as “The Shop.” Curmudgeonly and ill-tempered, the gruesome two-some stomp about a Neo-Los Angeles of the near future in a world overflowing with secret societies jockeying for power, whole pantheons barely held in check by a lightly-worded pact, the Fae trot out contracts made with the American Government who, in turn, holds contracts with even older, interdimensional forces.

With people undergoing metamorphosis into Monster-Genes on a weekly basis, pandimensional villains threatening to invade on a daily basis, and the Vatican and FBI all over them, the Shop must contend with an ever-increasing and annoying roster of personalities ever seeking to over throw the government, the world, or The Shop itself in an effort to claim their title as the topmost feared killers in Neo-L.A.

The books in the series are, in chronological order:

The Generalist contains examples of: