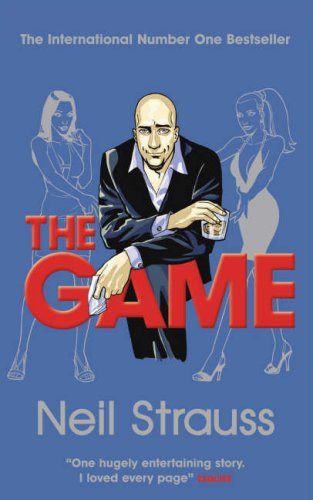 "Those who have read the early drafts of this book have all asked the same questions: "Is this true?" "Did it really happen?" "Are these guys for real?" Thus, I find it necessary to employ an old literal device...: The following is a true story. It really happened."
— Neil Strauss, because the book really is that weird.
Advertisement:

The Game: Penetrating the Secret Society of Pickup Artists is a 2005 book that explains the techniques and concepts used by a society of pickup artists living within the United States, written in the form of a novel instead of a typical self-help book. Using himself as an example, former Rolling Stone and New York Times writer Neil Strauss tells the story of his transformation from an AFC (an "Average Frustrated Chump") to one of the greatest pickup artists in the world.

The book follows Strauss as he signs up for a pickup artist class held by "Mystery", a revered leader in the seduction community. Strauss takes on the Screen Name of "Style" and begins to assimilate the concepts, pickup lines and routines Mystery teaches them. Together with a group of fellow pick-up artists, the duo move into a mansion in Los Angeles which they open as a "haven" for other PUA's, called "Project Hollywood". Eventually, however, Strauss finds himself rejected from the community, and learns that all the seduction techniques in the world don't mean much when he finds his true love. The book also breaks down the "codes" used by various PUA's, and details the different types of "seduction communities" that currently exist on message boards.

The Game was a bestseller, and caused a firestorm of controversy from fellow pickup artists who believed Strauss had sold them out. A companion book, Rules of the Game, was released in 2007 and another book that can be considered a sequel, The Truth: An Uncomfortable Book about Relationships was released in 2015.