Literature / The Footprint of Mussolini 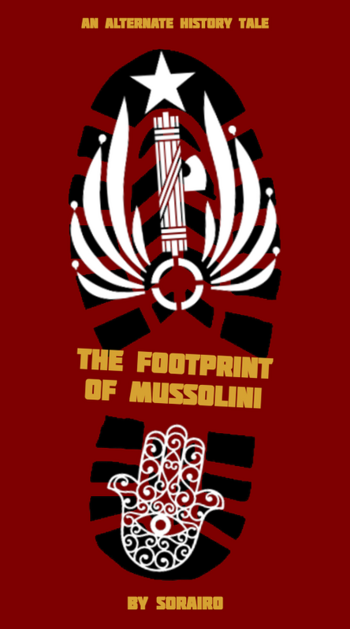 )
"[Issac] Carpi would be praised as a model Italian citizen and Fascist for the rest of the Fascist era, even getting a biography made of him in 1958. But that wasn’t the main influence Carpi left behind. Not since Gavrilo Princip, perhaps, has one simple man changed the fate of so many millions."
Advertisement:

The Footprint of Mussolini

Benito Mussolini came to power in war-torn Italy seeking to create a new Roman Empire, with himself as the emperor. In OTL, he tied himself to the Nazis, leading Italy down the road of ruin, and himself to overthrow and a humiliating demise.

TTL, however, a chance encounter with an assassin and the Heroic Sacrifice of a Jewish blackshirt changes Mussolini's outlook toward the Nazis. He proceeds to chart a unique course for the Italian empire, changing the events of the 20th century as well.

It can also be found in book format at Amazon

, having been self-published by the author.

Alternative Title(s): The Footprint Of Mussolini