Literature / The Eye of the Heron 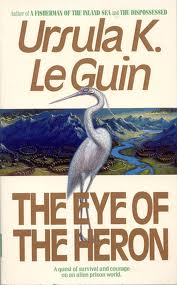 A short novel by Ursula K. Le Guin, first published in 1978, which, according to the Word of God, may or may not be a part of the Hainish Cycle.

The story takes place on a planet called Victoria, which has been chosen by the people from Earth to be a penal colony. The inhabitants of the planet are divided into two groups: the descendants of regular criminals and those of the radical pacifists whose ideas were considered too revolutionary to let them spread. Each group has its own social structure and worldview, along with a theory about the reasons of their having been sent to the same place and thus doomed to eternally coexist. Although the protagonist is the warrior leader's daughter who feels drawn to a boy from the other side of the conflict, the story is not another version of Pocahontas.

The text marks the beginning of feminist themes in Le Guin's fiction, as Luz Marina has to become sort of a leader using the skills which she has learned, willy or nilly, in her male-dominated social environment. (Also, the appearance and meaning of mysterous herons brings to mind theories of interpretation based on the notion of the Other.) As usual in the case of Le Guin, the opposition between anger and quietness is an important factor.