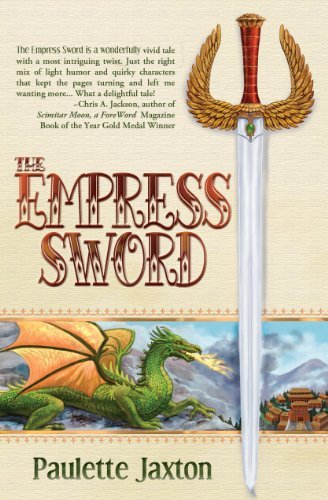 "This is not your father's epic fantasy story, but it might be your cousin Trudy's."
Advertisement:

The Empress Sword is a YA Heroic Fantasy novel (with a twist) by writer/podcaster Paulette Jaxton.

A dragon is terrorizing the kingdom of Caledon. When all attempts at stopping or slaying it fails, thirteen-year-old Prince Aster, heir to the throne of Caledon (who dreams of becoming a legendary hero), decides to take action on his own and, despite the warnings of Mandoline the court wizard, sets out to find the lost Eastern Empire and the legendary Empress Sword, an ancient and magical blade with the power to control dragons.

So far, this sounds like a very typical YA fantasy novel — but things are not quite what they seem, and Aster gradually discovers that everything is a lot more complicated than he'd thought. For one thing, the dragon, a young male named Mandrake, is not quite the rampaging beast or evil monster he appears as. And the Empress Sword is not a convenient weapon for a heroic young prince — in fact, it has a will of its own and will not let any man or boy wield it, unless he agrees to a "great sacrifice."

And the sacrifice is that he can no longer be a man or boy. So all of a sudden, Aster finds himself transformed into a girl. And is informed in no uncertain terms that he'll have to stay a girl if he wants to keep the sword and use it to deal with the dragon.

Together with a retired Captain of the Royal guard named Marcus, his spirited young daughter Maggie and a brave-but-bumbling wannabe knight called Eric, the newly-female Aster (now going by the name "Astrid") sets out on a very different kind of adventure than he'd expected, which will only get more complicated and include more shocking twists and revelations not only about the dragon and the sword, but about Aster's own life and the hidden things that have been going on in the background. The prince-turned-princess will have to deal with far-reaching consequences of his choice, learn how to handle the rampant misogyny in the country, work out his own developing feelings for another girl and for another boy — and of course take part in sword fights and dragon battles.

The Empress Sword began life as a podcast novel

, but has since been released both in print and as an e-book. In 2017, Paulette Jaxton announced that she had begun work on the sequel, The Empress Spell.