Literature / The Eddas
aka: Edda 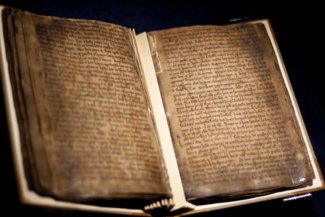 The Codex Regius: Not actually that impressive.note Size of the pages is c. 5.2 x 7.5 "

Edda was originally only the name of Snorri Sturluson’s poetic manual (written c. 1220 CE), which was subsequently called Snorra Edda (Snorri’s Edda) or, more recently, Prose Edda. The name has often been taken to mean "great-grandmother", but this interpretation is considered outdated; state of the art is that it derives from the Latin "edo", "I compose poetry".

Centuries after Snorri, the term Edda was extended to include the so-called Poetic Edda. The latter is actually not a single, fixed work, but a collective term for all mythological poetry preserved in Icelandic manuscripts. The bulk of these poems, however, is contained in a single manuscript, the Codex Regius (the King’s Book), a tome that was created c. 1270 CE, though it is probably the copy of a book that had been around since 1230 CE. Editions under the name Poetic Edda usually combine the contents of the Codex Regius with lays found in a variety of other manuscripts, the composition of which varies. Those lays that are considered part of the Poetic Edda, but are not found in the Codex Regius, are sometimes called the Eddica Minora ("lesser Eddic lays"). The lays that form the Poetic Edda are generally of anonymous authorship.

Thus, the term Eddas has come to be used for Icelandic mythological literature in general, and mythological and heroic poetry is "Eddic poetry". As you may have realized, the definition is slightly arbitrary; for example, Icelandic sagas relating heroic legend (the fornaldarsögur) are not considered "Eddic".

Poetic Edda and Prose Edda are sometimes still referred to as Elder Edda and Younger Edda respectively. This terminology is considered outdated; the lays of the Poetic Edda are no longer regarded as invariably older than Snorra Edda, and the compilation of the Codex Regius was in fact done after the Snorra Edda (it is even possible that Snorri Sturluson had a part in putting the Codex together). Even older literature may refer to the Codex Regius as Sæmundar Edda – based on the old but equally outdated tradition that the book was composed by Sæmundr Sigfússon "the Wise" (1056-1133), the founding father of Icelandic literature.

Most of our knowledge on Norse mythology (not necessarily on heroic legend) is taken from the Eddas. The only non-Icelandic source that can compete is Gesta Danorum a.k.a. the Danish History of Saxo "Grammaticus", which however is far less often consulted or referenced in popular representation of Norse mythology.

Tropes found in both Eddas: