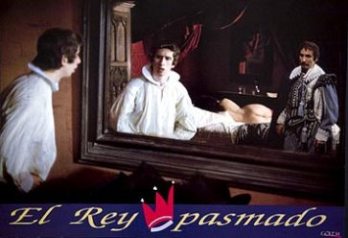 The Dumbfounded King (Crónica del Rey Pasmado) is a novel by Gonzalo Torrente Ballester published in 1989 and adapted into a movie by Imanol Uribe in 1991.

Spain, 1620. The young King Philip IV has been invited by one of his courtiers to the brothel, and the night he spends in the arms of gorgeous Marfisa, a high-class courtesan, is an eye-opener for him in more ways than one. Up to now strictly chaperoned by Church authorities, he discovers how enjoyable sex can be when done right, and he wants to see the Queen, his lawful wife, naked. The Queen is French and would happily comply, but the fastidious rules enforced by Church authorities keep getting in the way.

The King's apparently simple request becomes an affair of state, and results in a struggle of influence inside the Church between those who deem it reasonable, and those who want to keep the King's sex life under strict control. Even the Devil seems to get involved. Will the King finally get his wish?