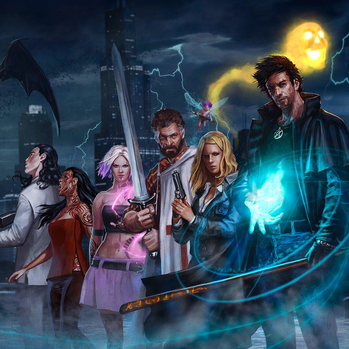 Fighting the good fight.note From left to right: Thomas Raith, Susan Rodriguez, Molly Carpenter, Michael Carpenter, Toot-toot, Karrin Murphy, Harry Blackstone Copperfield Dresden and Bob the Skull. Not pictured: everyone else.
"My name is Harry Blackstone Copperfield Dresden. Conjure by it at your own risk. When things get strange, when what goes bump in the night flicks on the lights, when no one else can help you, give me a call. I'm in the book."
— Harry Dresden
Advertisement:

There are currently seventeen published novels in the series, with the last book, Battle Ground, having been released on September 29, 2020

There are also twenty-six short stories and six pieces of microfiction set in the Dresdenverse. Most of them have been published or republished in Dresden-exclusive collections. The collections and stories are:

The three Bigfoot stories were also collected in a separate illustrated collection entitled Working For Bigfoot and were also made into a full graphic novel adaptation simply titled Bigfoot. The short story "A Restoration of Faith" and the microfiction vignette "Everything the Light Touches" were adapted into illustrated versions as well.

Word of God says that the series will have twenty-two "case" books like the ones already published, which will then be capped off by an apocalyptic trilogy for a total of twenty-five books.note This may now be twenty-six books, since "Peace Talks" was split into two volumes, adding "Battle Ground" to the list. Butcher has also said the exact number could vary a little, depending on whether his kid wants to go to grad school. Because, to quote the author, "Who doesn't love apocalyptic trilogies?" In August 2011, he hinted that the titles of the final three books would be "Stars and Stones", "Hell's Bells", and "Empty Night", because "they're called curses for a reason." There is also a planned Young Adult Literature spinoff series to be co-written with at least one of Butcher's sisters centered on Dresden's daughter, Maggie, and dog, Mouse.