Literature / The Diary of a Young Girl
aka: The Diary Of Anne Frank 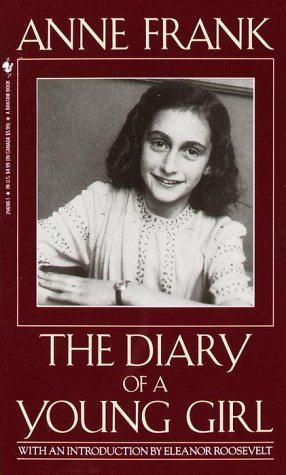 One of the most famous and memorable accounts of World War II and The Holocaust, The Diary of a Young Girlnote Het Achterhuis (The Secret Annex) in the original Dutch, also known as The Diary of Anne Frank, was the title given to the edited version of the diaries of Annelies Marie "Anne" Frank (12 June 1929 – February or March 1945), a Jewish German schoolgirl living in Amsterdam.

In 1942, Anne was given a diary notebook for her 13th birthday. By that point, Germany had already invaded and occupied the Netherlands for two years. At first, the Franks tried to live out the occupation, but as the genocidal intent of Adolf Hitler and the Nazis became clear, Anne's father Otto built a secret shelter in the building where he worked (by that point, the country's borders were closed and travel for Jews was tightly regulated; leaving Amsterdam would have been impossible).

On the 6th of July 1942, Anne's sister Margot received relocation orders to enter a "work" camp. The Franks, along with the Van Pels family and another Jewish friend, immediately moved into what would become known as the Secret Annex.

The rest of Anne's diary chronicles the next two years of her life in the cramped Annex along with her fellow fugitives. The daily routine consisted of absolute silence during the day, since the business was still running below them, blissfully unaware of the Annex or its occupants. There was relatively more freedom during the night, though they could not leave the building at all. Their only contact with the outside was a contraband radio and a few co-conspirators who brought them weekly supplies.

As human nature would dictate, locking eight people in half of a townhouse under such stressful situations meant that each of the occupants proceeded to get on everyone else's nerves. The diary abounds with morbidly funny tales of the occupants arguing over rations, radio channels, and people's cooking. They even argued over bathroom privileges, since any small mistake — such as a toilet flushing at the wrong time — could get everyone killed.

On top of the domestic melodrama, Anne also wrote about the teenage rebellion she could never act on, her confusion over puberty and budding sexuality, her deepest thoughts and philosophy, and her burgeoning romance with the handsome Peter van Pels. The diary can sometimes sound like the writing of any teenage girl, albeit an insightful and interesting girl with excellent diction and writing skills, if you forget the whole hiding-from-the-Nazis situation.

The last entry in the diary was written on the 1st of August 1944. Three days later, the Grüne Polizei stormed the Annex. Everyone inside was sent to a concentration camp; Anne herself was sent to Auschwitz, then Bergen-Belsen, where she died of typhus in February or March 1945 — barely a month before that camp was liberated.

Of those who lived in the Annex, only Otto Frank survived Auschwitz and returned to Amsterdam. Family friend and co-conspirator Miep Gies managed to save all of Anne's papers from the ransacked house, then convinced Otto that the world needed to know about what had happened. The book was first published in Dutch in 1947, then translated to English in 1952, and it has never left the public consciousness since. If you pull someone out of a crowd and ask them to name a Holocaust victim, they will probably name Anne Frank.

One point five million young children were murdered (shot, gassed and etc.) in the Holocaust, but that is too big for the "average person" to mentally process (A Million is a Statistic) so Anne is used as a figure in popular culture to represent all of them. The official Auschwitz Museum is working hard to remember the individual children through its social media accounts. See an example here with French Jewish child Gina Goldstein

who was gassed upon her arrival at Auschwitz not long after her sixth birthday.

The best known adaptation of the book is the play (1955) and movie (1959) The Diary of Anne Frank. There is also the 2001 miniseries Anne Frank: The Whole Story and the 2021 Magical Realism animated movie Where Is Anne Frank.

The Diary of a Young Girl includes the following tropes:

This video is from the Mentors TV show. A time-displaced Anne Frank experiences freedom in modern-day Canada after months stuck in the Annex, happy to learn that in the future Jews can live their lives like everyone else.

This video is from the Mentors TV show. A time-displaced Anne Frank experiences freedom in modern-day Canada after months stuck in the Annex, happy to learn that in the future Jews can live their lives like everyone else.