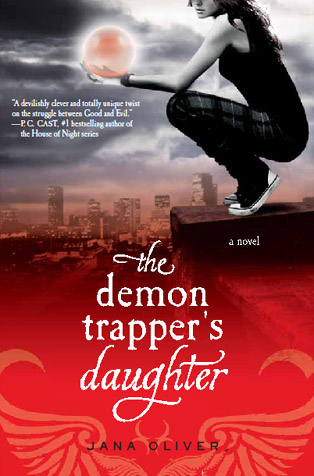 The Demon Trappers Series is a series of young adult books written by Jana Oliver.It’s the year 2018, and with human society seriously disrupted by the economic upheavals of the previous decade, Lucifer has increased the number of demons in all major cities. Atlanta is no exception. Fortunately, humans are protected by Demon Trappers, who work to keep homes and streets safe from the things that go bump in the night. Seventeen-year-old Riley, only daughter of legendary Demon Trapper Paul Blackthorne and the sole female trapper in the Atlanta Guild, has always dreamed of following in her father’s footsteps. When she’s not keeping up with her homework or trying to manage her growing attraction to fellow Trapper apprentice, Simon, Riley’s out saving citizens from Grade One Hellspawn. Business as usual, really, for a demon-trapping teen. When a Grade Five Geo-Fiend crashes Riley’s routine assignment at a library, jeopardizing her life and her chosen livelihood, she realizes that she’s caught in the middle of a battle between Heaven and Hell.