Literature / The Death Mage Who Doesn't Want a Fourth Time 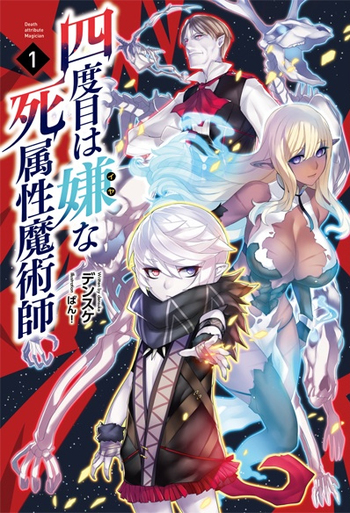 "The change from the living to the dead. It's considered to be irreversible, and yet I have power over it, and I have to overturn it. In other words, I'll do whatever I want with it."
"I was simply passing by and there were people who were in trouble, so I helped them 'a little'. Those people were happy, and I became happy as well. And then while I was helping them 'a little', we became close to each other and I made friends. And then people came to try and kill those friends and use dirty methods to take everything from them, so I helped them 'a little' once more. Is it really that strange?"
—Vandalieu, explaining why he wiped out a noble's personal army.
Advertisement:

Hiroto Amamiya is an Ordinary High-School Student whose life has been an endless string of misfortunes, starting with the death of his parents when he was a child. This finally comes to a head during a school field trip, when the boat he's on gets caught up in a terrorist bombing and he dies trying to save a girl he barely knew. Afterwards, Hiroto awakes to find himself and one hundred other passengers on the boat, including the girl he had tried to save, being offered a chance by a god of transmigration named Rodcorte to to be reincarnated on another Magitek-based world called Origin.

Unfortunately for Hiroto, his second life is even worse than the previous one, with him being used as a human guinea pig for inhumane experiments into death magic, before finally encountering his end at the hands of the other reincarnated passengers. Appearing once more before Rodcorte, he learns that both he and his killers are meant to be reincarnated again. However, to prevent him from taking revenge, Rodcorte curses Hiroto before sending him off, hoping that he will commit suicide or die quickly.

Born for the third time on the High Fantasy world of Lambda, as a dhampir named Vandalieu, Hiroto resolves to live a fulfilling third life using everything at his disposal, including the death magic he gained in his last life, as he doesn't want to find out how much worse being born a fourth time could get.

The Death Mage Who Doesn't Want a Fourth Time (Commonly abbreviated as Death Mage) is a 2015 Web Serial Novel created and written by the author Densuke and published on the site Syosetsu. The series has been popular enough to also spawn a Hifumi Shobo published Light Novel adaptation written by Densuke with art by Ban! and a Comic-Book Adaptation written and illustrated by Takehiro Kojima.

In 2022 the Light Novel was licensed to One Peace Books under the title of The Death Mage.

The original web novel can be found here

, while an ongoing english translation can be found here