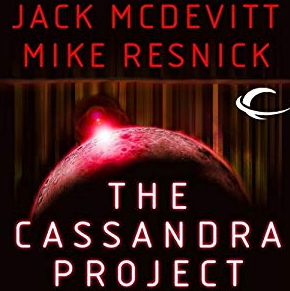 The Cassandra Project is an(other) Ancient Astronauts book by Jack McDevitt and Mike Resnick, based on a short story of the same name written in 2010.
Advertisement:

Fifty years since Apollo XI's "One Small Steps for a Man"note  that would be July 20th, 2019 and approximately sixty-one years after NASA's inception, Jerry Culpepper, the head of NASA's Public Affair Office department, received a surprise during the press conference on that day: the tape that was supposed to play Neil Armstrong's speech was switched to a guy named Myshko getting ready to land on the lunar surface. Naturally, this attracted drama from the press and a very rich person named Morgan (Bucky) Blackstone who owns a private space company. Morgan intends to dig deeper - after all, he started the space company just to give a middle finger to NASA - using every single resource, even landing on the moon. That resource pile includes Jerry, who at first turn down the offer but later accept it after getting harassed by the media and NASA's administrator Mary Gridley after finding out about a secret project known as the Cassandra Project. And thus the adventure begins!