Literature / The Broken Empire Trilogy
aka: The Prince Of Thorns 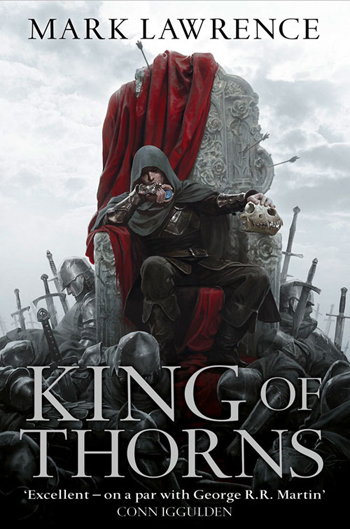 "A dark time comes. My time. If it offends you. Stop me."
"The thorns taught me the game. They let me understand what all those grim and serious men who’ve fought the Hundred War have yet to learn. You can only win the game when you understand that it is a game. Let a man play chess, and tell him that every pawn is his friend. Let him think both bishops holy. Let him remember happy days in the shadows of his castles. Let him love his queen. Watch him lose them all."
— Jorg
Advertisement:

We first meet our hero, Prince Honorous Jorg Ancrath, when he's a lad of thirteen years, burning a peasant village, slaughtering the farmers and raping their daughters. It only gets worse from there. Jorg may be nothing but the leader of a murderous band of outlaws now, but his ultimate goal is to win the war that has torn the land asunder for centuries and crown himself Emperor over a hundred squabbling kingdoms. There's nothing he won't do and nobody he won't sacrifice to get there.

As well as the short story collection, Road Brothers, Tales From the Broken Empire, which features side stories and backstories for some of the characters.

The author has another trilogy, The Red Queen's War - set in the same world - which can be read independently. That said, it does provide some crucial information on what is going on in the background of this one, and Jorg even shows up at one point to meet the other protagonist, Jalan.

Alternative Title(s): The Broken Empire, The Prince Of Thorns