Literature / The Boy with the Chainsaw Heart 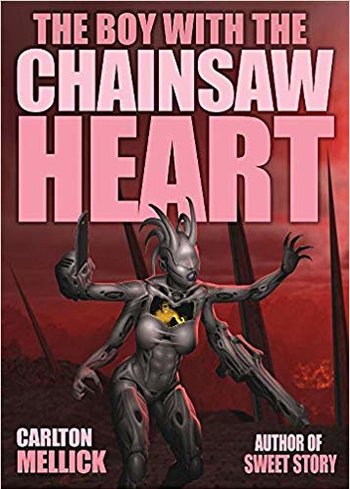 Mark Knight wakes in the afterlife to discover that he's been drafted into Hell's army, forced to fight against the hordes of murderous angels attacking from the North. He finds himself to be both the pilot and the fuel of a demonic war machine known as Lynx, a living demon woman with the ability to mutate into a weaponized battle suit that reflects the unique destructive force of a man's soul.

While piloting Lynx, Mark adapts quickly to his new life as a soldier and learns that his abilities far surpass those of a normal human recruit. His fighting skills are so great that it could even be a turning point in this war that has not progressed in over five thousand years. But Mark has no interest in winning the war for the kingdom of Hell. All he wants is to see his wife, Amy, once again. As a Christian woman who died tragically in her youth, Mark is positive that she went to Heaven after her death. And if he can fight his way past the angels to reach Heaven's Gate, Mark believes he'll be able to rescue Amy from a life of servitude and find a place they can live together for the rest of their post-human lives.

The Boy With The Chainsaw Heart is a Bizarro Fiction story by Carlton Mellick III.