Literature / Tales from the Crib 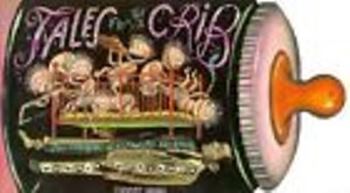 The horrible truth about parenting!
Tales from the Crib was a die-cut, bottle shaped picture book aimed at adults that was written by Henrik Drescher and was made in 1994. This book was basically about portraying the hard life that parents have to go through when raising their children such as being tortured by their children or not enjoying any sexual desires they have for each other.

Tales from the Crib provides examples of the following tropes: