Literature / Tales from the Securemarket 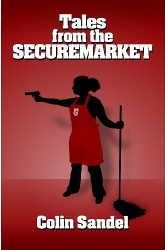 Customer Service Pistol.
"Have you ever wondered why your office requires that its employees have Martial and Magic Certification, but your local supermarket doesn’t? We seek to change this standard. The Securemarket™ is simply the safest and best shopping experience in New Washington, providing a wide selection of high-quality food and maintaining the best standards of protection in the service-provider industry. Our employees are all trained in the use of magics and weaponry and periodically participate in training retreats designed to hone their ability to protect and serve you. In the greatest city in the world, you shouldn’t expect anything less."
—Introduction, Tales from the Securemarket™

Tales from the Securemarket™ is an Urban Fantasy novel by Colin Sandel set in the fictional city of New Washington, which is itself located somewhere in the remains of the former United States of America.

Rather than focusing on the fantastical and adventurous aspects of its fantasy setting, Tales focuses instead on the mundane travails of a group of supermarket clerks working at one of the larger, better-respected grocery chains in the city.

The initial focus of the plot is the tumultuous romantic plot between the two most central heroes: Zap Bradshaw, a student of wizardry at Ethertech University, and Steve Anderson, a (female) apprentice gunsmith. The story itself is separated into three 'arcs', beginning with day-to-day stories at the store, following the employees to a training retreat, then bringing them back to changes in the store: namely, a deli counter and political unrest.

The book's official site is here.

It's available in paperback through Amazon and can be read online or on an e-reader for free.