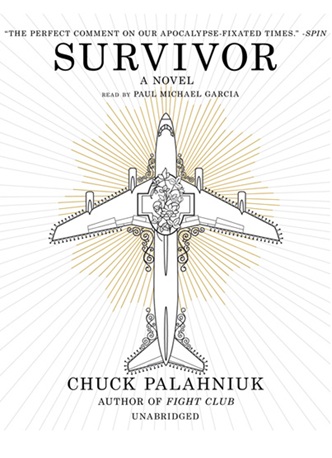 Survivor is a satirical novel by Chuck Palahniuk, first published in February 1999. The book has the unique feature of its chapters and pages being numbered backwards, beginning with Chapter 47 on page 289 and ending on page 1 of Chapter 1.

Tender Branson, the last surviving member of the Creedish Church Death Cult, has commandeered a Boeing 747, emptied of passengers, in order to narrate his life story to the plane's black box before its impeding crash-course with the hard ground of Australia.

Brought up by the church's repressive ideals, he, like any fellow cult member, learned how to be a submissive servant for the human race — by hiring out as domestic help or menial laborers — and live a simple life free from human pleasures. That is until all except our protagonist committed suicide and Tender was suddenly thrust into the spotlight. As a media messiah, he ascends to the tippity top of the freak-show heap before finally, and apocalyptically, spiraling out of control.