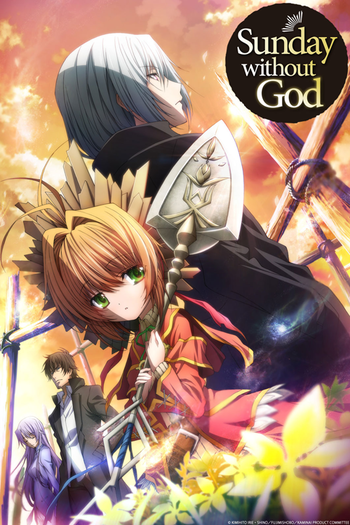 Where is my God?
"This world is already full.
That world is reaching its limits.
Ah, I failed."
Those were the only words left behind fifteen years ago.
Advertisement:

Sunday Without God (Kamisama no Inai Nichiyoubi) is a series of light novels written by Irie Kimihito and illustrated by Shino, which was published from 2010 to 2014 for nine volumes. The series tells about a young girl called Ai, who lives in a world which, according to legend, God abandoned fifteen years ago. Because of this, human beings can no longer truly die or give birth. Only the mysterious people known as "gravekeepers" are able to give peace to the would-be dead. Ai, who is half-gravekeeper and half-human, works as the gravekeeper of her own village, despite her young age of twelve.

However, Ai's life changes drastically when a man who introduces himself as Hampnie Hambart, the "Man-eating Toy," arrives in her village and slaughters everyone around her. After burying the deceased and helping them find peace, Ai confronts the man to learn the truth behind his actions. Her worldview changed, she sets out on a journey and meets new companions along the way, and her dream is to save the world God has abandoned.

A manga adaptation was serialized in Monthly Dragon Age from 2010 to 2013, and the first three volumes adapt the first novel while the fourth and final volume consists of extra stories expanding on the characters' backstories and personalities. The series was also adapted to an anime series, which aired in the summer of 2013, and it adapts the first five novels. The anime is licensed for an English release by Sentai Filmworks in North America and Madman Entertainment in Australia and New Zealand and also received an English dub, and it can be watched on Crunchyroll

Check out the characters page here.