Literature / Sulien
aka: The Kings Peace 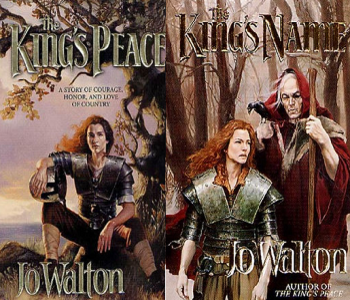 Jo Walton's Sulien series, consisting of The King's Peace and The King's Name, is a loose retelling of the King Arthur story set in an alternate sixth century Britain called Tir Tanagiri. The protagonist is the woman warrior Sulien ap Gwien, who fights to support her king, Urdo ap Avren, and the peace he is trying to establish. The King's Peace follows Sulien as she joins Urdo's army, forms her loyalty to him, and has to make a difficult choice between the peace they both seek to establish, and the vengeance to which she is entitled by law and custom. The King's Name has Sulien returning to Urdo's service after some years, during a civil war.

There is also a prequel, titled The Prize in the Game, which is a retelling of part of the Táin Bó Cúailnge as well as a backstory for Urdo's wife Elenn, her sister Emer, and Emer's lover Conal. It details their adolescence and coming of age, as well as a war between their home kingdoms. A direct sequel was planned at one time, but has been cancelled. It would have been titled Breaking the Ward.

Tropes in the original duology:

Tropes in The Prize in the Game: