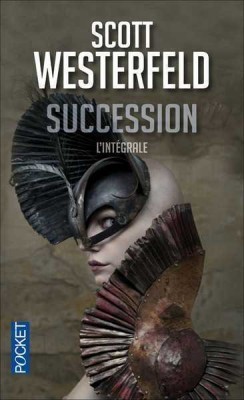 Succession consists of the two novels, The Risen Empire and The Killing of Worlds, by Scott Westerfeld. They take place several millennia into the future, when humanity has spread and altered itself vastly.

The Risen Empire are made up of the Eighty Worlds, planets ruled by the Risen Emperor, who found a way to become immortal in order to save his twelve-year-old sister. This defeat of the Old Enemy, death, led to his becoming the ruler of the empire along the Senate with his sister, the Child Empress, for 1600 years; anyone who is "elevated" (i.e. considered worthy) who dies cleanly can be given the symbiant, which returns them to life. Of the other civilizations, the most prominent is the Rix Cult, cyborg women devoted to spreading compound minds (meaning intelligent AI that takes over anything electronic it can get access). The Empire and the Rix are often at odds with each other, as most of the Empire sees intelligent machines as unnatural.

The Risen Empire begins with the Rix taking the Child Empress hostage in order to spread a compound mind on her home planet, Legis XV. Captain Laurent Zai, a war hero piloting a prototype reconnaissance starship in the Legis system, is commanded to save her and the political prisoners also trapped with her. These hostages are so important that any of their deaths on Zai's part will lead to an Error of Blood, a ritual suicide without reanimation for not completing the Emperor's wishes. Complicating things on Zai's end further is his relationship with Nara Oxham, a senator who he's fallen in love with and who is openly against reanimation and the Emperor's rule. The plot thickens through many desperate twists and battles as Oxham and Zai try to keep the empire and each other from falling apart. The books were originally meant to be one book but were split for publishing reasons, so The Risen Empire just kind of ends; The Killing of Worlds picks up directly where it leaves off.

As two of Westerfeld's earliest novels, it's easy to see where inspiration and concepts in his later works came from.