Literature / Steal Across the Sky 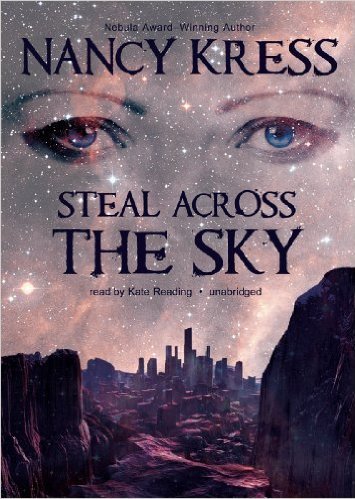 An alien race calling itself the Atoners has put up a website and then landed on the moon. No human has seen them — they have only heard their voices. The Atoners claim to have committed a crime against humanity, and they recruited twenty-one Witnesses from the human race to see what exactly they've done. The Witnesses were taken to seven systems of two paired life-supporting planets; they were not told what to look for, only that they would know it when they saw it.

The first part of this novel focuses on three witnesses in particular:

Part two is what happens about three years later, after everyone gets back with the news of what the Atoners had done. All the surviving witnesses are famous. There are six people who are spreading the word on what they have done, including Cam, who is spreading it with an extremely high profile. Lucca also saw it, but since he didn't believe in what he saw and since he went into seclusion almost immediately after returning to Earth, he usually isn't counted. Soledad, who didn't see it but knows what was seen, sort of, is also trying to live a quiet life — she's effectively in witness protection — but her relatives, whom she has always hated, prevent that dramatically. The Atoners themselves have gone silent and don't appear to be doing anything, the governments of the world aren't doing much to help, and several groups are trying to kill Witnesses. In this environment, another of The Six, Frank, decides that the problem can be fixed and that God wants him to fix it (it's official penance) — and then finds he needs to get help doing it. Between him and Soledad, chaos ensues.