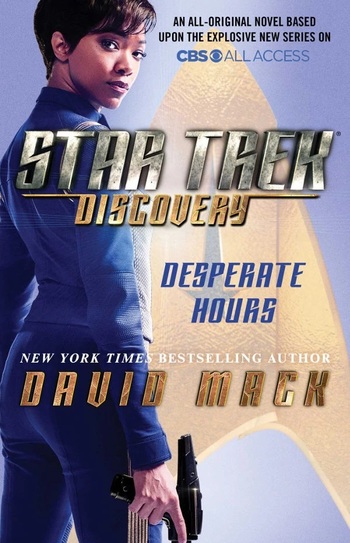 A tie-in novel for Star Trek: Discovery, taking place a year before the show's first season. It takes place in the series' novel universe.

Lieutenant Michael Burnham, Science Officer aboard the Starship Shenzhou is promoted to Acting First Officer, narrowly edging out her longtime rival, Lieutenant Saru, for the coveted position by Captain Philippa Georgiou's side. Soon after, they receive word that an alien behemoth has risen from the sea of Sirsa III, destroying a mining rig and launching an attack on the capital. Shenzhou is dispatched to render aid and investigate the threat, and soon after is joined by the Starship Enterprise, under the command of Captain Christopher Pike, who has been ordered to destroy the unknown attacker before it can leave Sirsa III, at any cost. Things go from bad to worse when the colonial government, led by Governor Kolova, is discovered to have established the colony under less-than-legal means, and takes up arms against the Starfleet personnel.