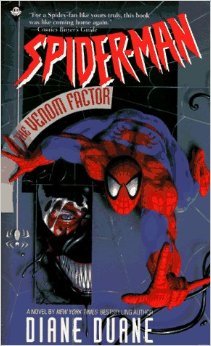 Spider-Man: The Venom Factor is a 1995 Spider-Man novel written by Diane Duane and co-starring Venom (Eddie Brock). It is the first book in a trilogy nicknamed the "Venom Trilogy" involving both characters repeatedly encountering an organization named the CCRC. When a homeless man is brutally murdered in a warehouse, all the evidence points to Venom as the perpetrator. Add the mysterious disappearance of nuclear materials and the Hobgoblin (Jason Macendale) swooping around, and Spider-Man has his hands more-than full. But is Venom behind the brutal murders, and if not, who... or what... is?