Literature / Spenser
aka: Spenser For Hire 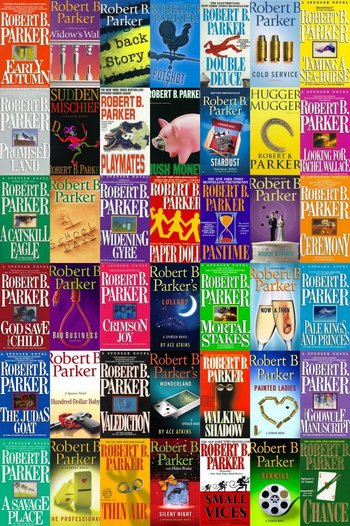 The Spenser novels are a long-running series of detective stories by Robert B. Parker, starring the eponymous private eye. Based in Boston with frequent excursions to other areas, the novels were much more experimental early on before settling into a comfortable niche (or, as some might say, rut). The series is one of the most popular and influential modern works both inside and outside its genre (it’s, most notably for this particular wiki, a large influence on both Peter David and The Dresden Files), and Parker has been called the modern successor to Raymond Chandler.

Spenser used to be a cop, but was quickly bounced from the force for being insubordinate. He now works as a private investigator in Boston. With his best friend Hawk for backup, and occasional psychological consultation from his girlfriend Susan Silverman, Spenser's cases tend to start off simply before spinning wildly out of control.

There have been several adaptations of the Spenser series. The first, and best known is Spenser: For Hire (1985-88) which aired for 3 seasons on ABC, and starred Robert Urich as Spenser, with Avery Brooks as Hawk. The series spawned a short-lived Spin-Off A Man Called Hawk (1989) starring Brooks, as well as a mid-90s series of TV movies, directly based on the novels, airing on the Lifetime network, with Urich and Brooks returning again reprising their roles.

From 1999-2001, A&E produced a trilogy of TV movies starring Joe Mantegna as Spenser and Marcia Gay Harden as Susan, with Parker adapting the films himself. In 2020, Netflix released Spenser Confidential, an extremely lose adaptation of Ace Atkins' Wonderland, starring Mark Wahlberg, with Winston Duke as Hawk.

The books in the series include
Advertisement:

A weekly series based on the characters, Spenser: For Hire, aired for three seasons (1985–88) on ABC. Robert Urich starred as Spenser, with Avery Brooks as Hawk. Urich and Brooks reprised the roles for a series of TV movies on Lifetime (The Judas Goat, Ceremony, and Pale Kings and Princes, among others) later on.

A later trio of TV movies on A&E — Small Vices, Thin Air, and Walking Shadow — replaced Urich with Joe Mantegna, and Brooks with Shiek Mahmoud-Bey and then Ernie Hudson, with Marcia Gay Harden appearing as Susan Silverman. The movies, unlike most episodes of the show, are each based directly upon one of the novels.

2020 sees a new Spenser movie for the first time in 19 years, Peter Berg's Spenser Confidential, starring Mark Wahlberg as Spenser and Winston Duke as Hawk. A Netflix original, it's extremely loosely based on both the Spenser universe (Spenser is an ex-con, Hawk is a much younger ex-fighter, Susan is wholly absent) and Atkins's book Wonderland.