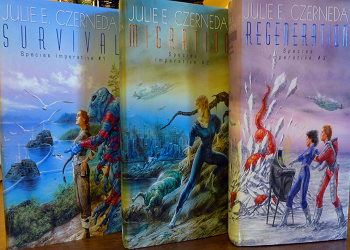 Sometime in the future, Earth has become part of the Interspecies Union, a thriving interstellar community connected by no-space transects and overseen by the Sinzi race. No war is permitted between species, making the series of mysterious disappearances of life along the Naralax Transect— which includes Earth— all the more alarming. No few researchers have compared these sudden barren zones to the lifeless Chasm worlds: an entire transect full of dead planets that once held life.

Survival introduces us to Mac and fellow researcher Emily Mamani, pioneer of the new Tracer technology, at the start of a usual research season, only to be interrupted by the Dhryn, Brymn, and his handler, Nikolai Trojanowski. Nik, an apparent bureaucrat has come to ask Mac to help investigate the disappearances; Brymn has sought her out for answers of his own. Without warning, Emily is abducted by the Ro, the Dhryn species' oldest enemy, and Mac is rushed to their homeworld to prevent the same from happening to her. Here, answers finally start to fall into place.

Migration picks up the following year: Mac is returned to Earth only to be brought to the planet's IU Consulate to work in earnest, trying to find the reason behind what are now entire planets being stripped bare. Unfortunately, the real difficulty comes from convincing the people on her own side who the enemy is. Disaster is averted, yet not without losses, and a few vital gains.