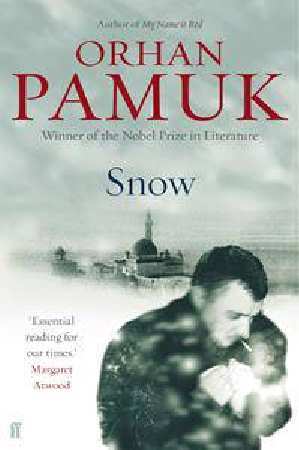 No one here likes Ka these days.
Advertisement:

Orhan Pamuk's Snow tells the story of Ka, a lonely poet returning to his Turkish homeland after long years of exile...

Well, sort of. Actually, it's really more about Turkey's continuing identity crisis, and the endless push-pull between secularism and Islam, modernity and romanticism, rich and poor, nationalism and leftism...

But that doesn't really do it justice. Art's the important thing, how it inspires and is inspired. The novel references art from many different mediums, showing how it can transform minds...

Put simply, Snow is all of this and more. Ka finds himself going to the remote eastern city of Kars, its lonely houses in the path of a snowstorm. His purpose? To reconnect with the beautiful İpek, a woman he'd loved ardently but lost to a fellow leftist, named Muhtar, during his student days. Ka's more or less abandoned politics, preferring his own artistic dreamscape to the world's reality. He finds out that İpek's separated from Muhtar (who's become an Islamist), which at first seems a cause for much rejoicing.

Yet it gets more complicated. Kars is a poor town facing a crisis in which religious teenage girls have been committing suicide. Each of the suicides was known for wearing a headscarf, in accordance with Muslim tradition. Turkey's strict secularism forbade female students from donning headscarves in class; since many refused to take them off, they were denied an education. Given that Kars is a poor city with little apparent future, this is a tremendous sacrifice. Of course, Islam strictly prohibits suicide, so no one is quite sure why these girls would kill themselves. Complicating matters even further is that İpek's younger sister, Kadife, is considered the leader of the Kars headscarf girls. Though she never tried to kill herself, she's quickly attracting attention and controversy.

Into this mix comes Sunay Zaim, a theater troupe manager and actor with a rather... intense nationalistic and secularistic streak. He's trying to attack the Islamists in town by doing a florid performance of My Fatherland or My Scarf, a Turkish play that condemns religiosity. Opposing him is an Islamist named Blue, a wanted terrorist and killer, and the students at a local religious bigh school. Hovering over everything is the army and the ubiquitous secret police known as MİT.

Ka wants only to reconnect with İpek and end his writer's block. But this starts looking less and less likely as violence starts to shake Kars, and a snowstorm cuts it off from the rest of the world.

Snow earned its writer a well-deserved Nobel Prize in Literature. It offers a fascinating look at the contradictions and concerns of modern Turkey. Though the author's sympathies are more with the Westernized, secular Turks, he shows that the Islamists have a legitimate grievances, and that the Turkish government has more than its share of dark secrets (Pamuk himself is rather unpopular in Turkey due to his criticisms of the governments treatments of the Kurdish ethnic minority; he currently resides in the United States).

The novel provides examples of the following tropes: