Literature / Skylark Series
aka: The Skylark Of Space 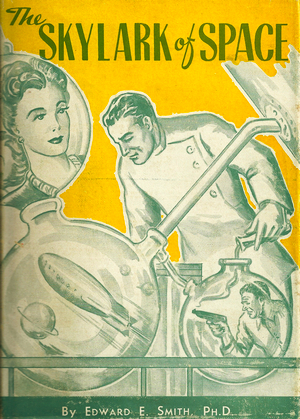 "I'm here to bring you a message: to tell you that humanity has never been conquered permanently and never will be so conquered. Humanity has triumphed and will continue to triumph over all the vermin infesting all the planets of all the solar systems of all the galaxies of all surveyed space."
— Dick Seaton
Advertisement:

The first science fiction series written by E. E. "Doc" Smith, better known for his Lensman series. Smith started work on The Skylark of Space in 1916, though he was unable to find a publisher until 1928, making the work arguably the first Space Opera, and certainly the first major one.

Richard Seaton, a chemist, discovers that an unknown extraterrestrial metal ("X") reacts with copper to provide total matter-energy conversion. Seeing the possibilities of this, he and his rich friend Martin Crane (who provides the initial capital) use it to build power stations—and a spacecraft, the "Skylark". The evil Marc DuQuesne, co-worker and collaborator with the highly pragmatic World Steel Corporation, wishes to steal it for himself, and descends to theft, then abducts Seaton's fiancée Dorothy to blackmail Seaton into stepping aside. Seaton and Crane pursue him into space to rescue her, and the story takes off from there.

There are four books: The Skylark of Space, Skylark Three, Skylark of Valeron, Skylark DuQuesne. (The last was written decades after the first three, and it shows.)

The Skylark Series contains examples of: