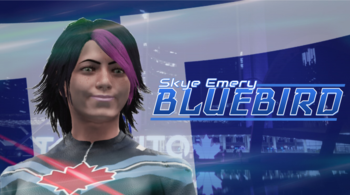 Skye Emery: Bluebird — consisting of Singularity & Blue Skye Rising — is a series of superhero web novels written by Marc Quill. First published in 2016, the series centers on the superhuman Skye Emery and her struggles to expose a conspiracy that's targeted her for mysterious reasons.

Singularity begins Skye's story as she's found herself on the streets of Toronto with no memories of her past and a set of superpowers that she has no idea of how she got them. Soon, she encounters Finch "Finn" Finwick, a gay youth who immediately decides to help Skye in discovering an expansive conspiracy that may also hold the key to her past. Along the way, they encounter a young superhuman named Ava Lorenz, who quickly joins in on the search for the truth.

Blue Skye Rising, the sequel to Singularity, continues Skye, Ava, and Finn's story as they not only have to contend with a brand new conspiracy that's got its eye on global domination, but the fame that comes with being Toronto's newest superheroes.

You can read both stories here